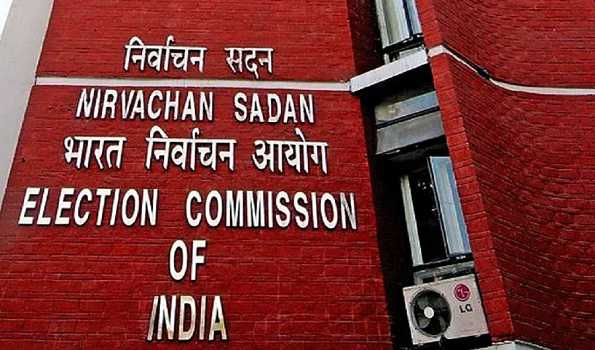 Responding to a Jammu-based lawyer’s request seeking defreezing of eight seats out of 24 earmarked for the Pakistan occupied Jammu and Kashmir refugees as per the Jammu and Kashmir Constitution in 1956, the Election Commission has said that the issue is under the Union Government’s jurisdiction.

Advocate Aditya Sharma of Jammu and Kashmir High Court at Jammu wing, in a letter dated September 21, to the Chief Election Commissioner, had stated that Jammu and Kashmir had witnessed a historic moment when the Article 370 was abrogated by the Union of India on August 5, 2019, whereby the doors of various opportunities have been opened for the people of Jammu and Kashmir and ended decades long the discrimination.

“Prior to the abrogation of Article 370 no voting right was there for refugees from West Pakistan i.e. PoJK refugees of West Pakistan, people of Valmiki community and many and the State Constitution enacted in 1956 had also reserved 24 seats in Assembly for PoJK and left the same vacant,” he said in a letter.

Sharma further stated that after the abrogation, a ray of hope had arisen for West Pakistan Refugees and other migrants from Pakistan to have right to vote and for the same purpose, if the eight seats out of 24 reserved seats, which belongs to west PoJK can be defreezed — it will give long pending justice to the migrants.

“Further more, a Parliamentary Committee report on PoJK refugees was submitted in the Lok Sabha and the Rajya Sabha that recognized that PoJK refugees were not given relief and compensation due to their non-registered status,” he stated.

“The committee also recommended to defreeze 8 seats out of 24 vacant seats,” Sharma added, saying further that in the 2022 Delimitation Commission Report, it was recommended that at least two members from the community of Kashmiri migrants be in the Legislative Assembly.

“The Commission said that the Central Government may consider of giving representations to refugees in assembly as well and it is therefore submitted that kindly consider the committee report of 2014 and delimitation commission recommendation of 2022 for defreezing of eight seats out of 24 seats for Kashmiri migrants, refugees from PoJK which were left vacant in the year 1956 and for giving representation to them respectively,” Sharma said in the plea.

“The Delimitation Commission in this regard had also prepared a report titled as “Delimited Landscape of Union Territory of Jammu and Kashmir”, which is available on Commission’s website,” the EC said.

It also said that the Delimitation Commission had recommended to the Union Government to consider the issue of representation by way of nomination of representatives to the Displaced Persons from PoJK in Jammu and Kashmir Legislative Assembly.

“Therefore, the issue is now under the jurisdiction of the Union Government,” the EC said in the reply.

Aditya believes that in the upcoming Assembly elections in Jammu and Kashmir, not only the refugees, who have been deprived of voting till now, will vote, but if the central government conducts elections on these eight seats or nominate their representatives, justice will be delivered and they have a voice in the Assembly.

Rashtriya Swayamsevak Sangh leader Indresh Kumar, during his recent Jammu visit had referred to his meeting with Lt Governor Manoj Sinha stating that they held a brief interaction over the situation in Jammu and Kashmir and also on Pakistan-occupied Jammu and Kashmir (PoJK).

“PoJK is part of Jammu and Kashmir which is an integral part of the country. We request the countrymen to pray, every morning, for the return of Kailash Mansarovar and PoJK and they again become part of India,” he had said.