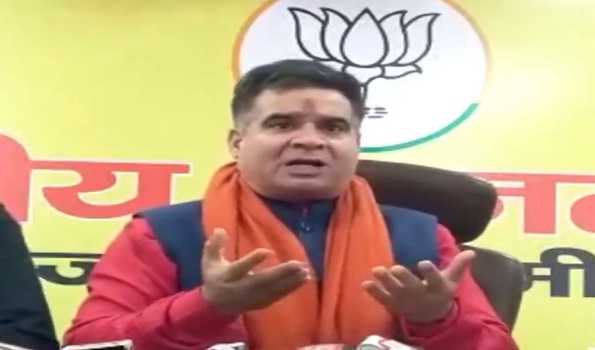 Jammu :  Making a scathing attack on Congress party and seeking apology from Rahul Gandhi over the remarks made by senior Congress leader on Indian Army and Indian Air Force, J&K BJP President Ravinder Raina on Tuesday said that Congress party is playing into hands of anti-India forces.

“The bravehearts of the Indian Army, JKP, paramilitary forces, Air Force, Indian Navy have sacrificed their lives for the Nation. They have given a befitting reply to the enemy forces,” said Raina.

He added, “Congress has always sided with the terrorists and separatists betraying India. It has become customary for Congress to speak against the interests of the Nation. It now has a stack of sins against the Nation accumulated over 70 years.”

“Congress divided India. It gave rise to separatism, terrorism. Gifted a big chunk of Jammu & Kashmir to Pakistan and China,” he added.

“Rahul Gandhi said that he is trying to understand the pain of J&K, but he must answer why Congress never gave rights to Gujjars, Bakkarwals, women, PoJK refugees, SCs etc. Congress is the culprit of the whole Nation, but it has specifically devastated Jammu & Kashmir,” Raina added.

“Today, Congress is talking of Kashmiri Pandits, but they had to suffer forcible ousts from their homeland and had to face horrible atrocities at the hands of fanatics, due to sins of Congress. Congress never talked to the Nationalists, but only with the terrorists like Yasin Malik. It has remained a supporter and sympathizer of terrorists”, said Raina.

“Today, Rahul Gandhi could enter J&K with ease only due to the sacrifice made by Dr. Shyama Prasad Mukherjee who laid down his life to remove the Visa like Permit system. This Permit, separate flag, separate Constitution, separate Prime Minister was a specific gift of congress to terrorists,” said Raina.

“The Modi government is working on the Ek Bharat, Shreshtha Bharat and Sabka Sath, Sabka Vikas missions. We have a vision for a perfect harmonious society of all religions living together with love,” said Raina.