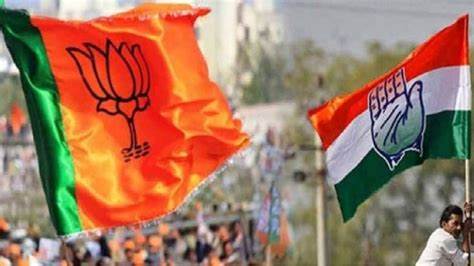 Consolidating its position, the opposition Congress was ahead in 39 seats – four more than the majority mark – while the ruling BJP won one and led in 25 constituencies on Thursday in the vote count for the Himachal Pradesh Assembly polls.

The BJP emerged victorious in the only result declared so far, while independents were leading in three seats, with result/trends available for all the 68 constituencies in the hill state that went to the hustings in a single phase on November 12.

The BJP retained the Sundernagar seat when its candidate Rakesh Kumar got the better of Sohan Lal of the Indian National Congress by more than 8,000 votes.

Among the leading BJP candidates was Chief Minister Jai Ram Thakur, who seemed set to win by a huge 20,000 plus margin from the Seraj constituency. However, half a dozen of his cabinet ministers – Sarveen Chaudhary, Suresh Bhardwaj, Rakesh Pathania, Rajinder Garg, Virender Kanwar and Rajeev Shaijal- were trailing. Two Cabinet Ministers Ram Lal Markanda, Vikram Singh, Sukh Ram Chaudhary and Govind Thakur were ahead of their rivals,

Assembly Speaker Vipin Singh Parmar. and Deputy Speaker Hansraj, both in the fray on BJP ticket, were leading.

The Congress established leads in six of the eight seats of Shimla district. The BJP contestants were in the top position in Jubbal Kotkhai and Chopal seats of the district. The Son of former minister Narendra Bragta, Chetan Bragta, was leading over four-time Congress legislator Rohit Thakur in Jubbal Kotkhai. BJP’s sitting MLA Balbir Verma established a lead from Chopal.

In Sirmaur distinct, BJP candidates continued to be in pole position in Pachhad, Poant Sabhib and Shilai seats.

Congress and BJP candidates were leading in two seats each in Bilaspur district.

The three Independent candidates were leading in Hamirpur, Dehra and Nalagarh. CPI(M) MLA Rakesh Singh is trailing by a slender margin in Theog.