JAMMU : The Lt Governor LG Sinha Administration’s strong determination to make Good Governance a ‘sin quo non’ of functioning has started paying dividends  as substantial number of officers and officials in the Administration are responding promptly to the issues brought to their notice by the public. Greater Jammu team came across one such issue that had remained addressed for decades and under the incumbent UT Administration the officer concerned has assured to resolve the long pending issue at the earliest. Undoubtedly the LG deserves full credit for rebooting the governance system in J&K that had reached unprecedented low with least hope of its retrieval to the optimum level.

To be more specific, here is the story of a common citizen namely Kapil Gupta living in Karan Nagar, Jammu who was is confronted with a serious issue for about two decades now. Twenty years ago, he established his abode at this place, but in just a couple of years a herculean  challenge erupted in his residential premises due to bursting of a water supply pipeline many meters deep under the land surface regarding which Kapil Gupta had no knowledge especially when he had got the due building permission for the house from the concerned authorities. Now for the past about two decades water distribution pipes due to the bursting have been causing extensive damage to his property with virtually water stream flowing from his house into the open premises and surrounding area. However, Kapil Gupta while talking to Greater Jammu lamented that despite approaching the concerned authorities to resolve this unabated problem none heeded to his repeated requests. Since the earlier attempts of knocking the door of the PHE Department to get rid of this problem going in vain, Kapil Gupta yet again this time approached the authorities concerned.

While narrating his agony, he was also made aware of the deteriorating condition of his house.

Kapil says that noticing the chaos with gushing water visible from every part of his house, due to which he fears that any untoward accident may happen risking the lives of members of his family. He appealed to the higher officials of Jal Shakti Department to get him out of this serious trouble before it is too late. 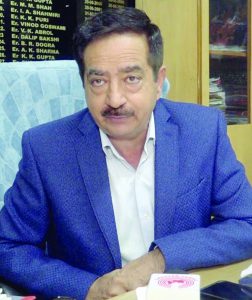 Greater Jammu contacted the Chief Engineer of the department, Hamesh Manchanda regarding the issue who said  that the problem is very complex but not impossible. He said that the pipelines being quite old are very deep and the department is seriously working on the options to find out a permanent solution to the issue. He added that   very soon a well planned strategy will be adopted to exactly diagnose the reasons for the problem and arrive at a feasible solution. He assured to leave no stone unturned in providing relief to the house owner and Kapil Gupta who has already suffered a lot for so many years.