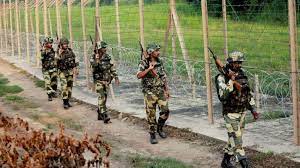 In a major breakthrough, the security forces foiled a major infiltration bid as a drone was captured along the Punjab International border.
The Border security forces (BSF) thwarted Pakistan’s drone-dropping attempt in Kalia village of Punjab’s Tarn Taran area on Monday night. A narcotics consignment carrying 2.5 kg of heroin was recovered. Notably, the drug seized is worth over Rs 10 crore in the international market. The security officials have launched a search operation across the area.
Drones are being sent from Pakistan for a long time in the border districts of Jammu and Kashmir UT and Punjab state.

BSF shot numerous drones in the past couple of days, including the largest drone yet to be sent from Pakistan which was 7 feet long. But for a long time the process of sending drones from Pakistan has continued unabated and is getting worse with time.
Now to prevent the arrival of drones, the BSF is exercising strict vigilance and have also involved police and civilians in the quest.