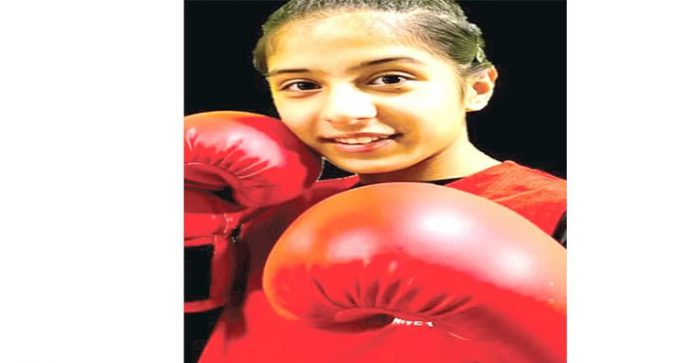 Ayeera Chishti, known as the ‘golden girl’ of the J&K Wushu martial art, made history by being the first female Wushu competitor from J&K to take home a medal at the World Junior Wushu Championship.

Ayeera Chishti won the bronze medal for India at the 8th Junior Wushu World Championship, which was held in Indonesia, opening a new chapter in the history of Wushu martial arts in J&K.

Ayeera previously became the first woman from J&K to be chosen for the World Junior Wushu Championship, and now that she has won a medal, she has elevated her status even further.

Ayeera defeated a Macau rival in the quarterfinal (china). Ayeera fell to Malak Ossama of Egypt in the semifinals after a competitive match that was decided on point differential. She was forced to accept the bronze medal.

Ayeera won the gold medal for India at the International Wushu Championship in Georgia before competing in the World Championship.

Ayeera was selected for the World Championship during the selection process conducted by the Wushu Association of India in Meerut. Ayeera also bagged a medal in the Wushu National Women’s League held in J&K.

Terming it a great achievement and a proud moment for him, Ayeera’s father Rais Chisti said,” It is a proud moment for me and my whole family. I am really proud of my daughter who is first ever girl from J&K to bag a medal in the World Championship”.

“She has already proven her mettle at the National and International levels. This was a bigger stage and she proved her talent at this level as well” Ayeera’s father said.

Ayeera’s Coach Asif termed it a dream come true for him and Ayeera.

“Dreams become reality thank you everyone for your blessings and support throughout this journey. There are many targets we have to achieve yet. This is another big milestone achieved, history created by wonder girl Ayeera Chishti,” Asif said.

“This bronze medal is worth more than a gold medal to me right now. Because she faced years of mental harassment and hurdles at certain quarters but she never gave up. She proved that she is the best, she is the true warrior and she fought like a champion not only in the arena but outside the arena too,” Asif further said.

Meanwhile, Ayeera’s coach Asif thanked Kuldeep Handoo CEO Wushu Association of J&K and said, “ It was my commitment and I accomplished step by step. There are still many targets to be achieved. It’s just a start”.

Dronacharya Awardee, CEO Wushu Association of J&K, Kuldeep Handoo said that it is a historic day for J&K Wushu.

“Ayeera with her ability and talent has started a new chapter in the history of Wushu in J&K. She has won medals at various stages but this one is bigger. I hope she continues her rise and go on to achieve similar results at the senior level and make all of us proud,” Handoo said.

Well-known female sportsperson of J&K Bilquis Mir has termed it another highlight of the rise of female athletes in J&K.

“It is another example of women’s power and female athletes making J&K proud. We should all hail her achievement and support her in future,” Mir said.