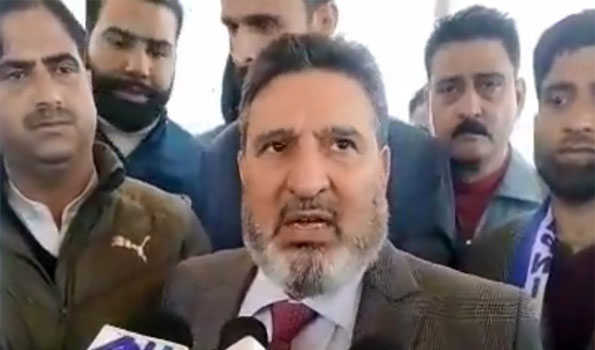 Apni Party is planning to hold a massive rally in Srinagar to press the Central government to restore statehood before announcing elections in Jammu and Kashmir.

President Altaf Bukhari on Thursday said the rally will be attended by about 50,000 people besides workers from all across the Valley.

“The rally will be held to convey a message to everyone that the Apni Party not by the emotions but by the truth, will fight for the aspirations of people with full force… either it is restoration of statehood or protection of jobs and land with constitutional guarantee,” he told reporters in Srinagar.

He said statehood to Jammu and Kashmir should be restored before the announcement of elections.

“Hold elections and first restore the statehood to Jammu and Kashmir as has been promised by Home Minister Amit Shah so that the aspirations of people could be redressed by the elected representatives” Bukhari told mediapersons in Srinagar on Thursday.

“Being a political party we are always ready for elections that happen or not our motive is to address the aspirations of the people,” he added.

“We will win the hearts of the people and feel their pain and represent their emotions”, he added.

Bukhari said his party will fight for the Article 370 and 35A until the Supreme Court gives its decision.

Asked that Mehbooba Mufti and Omar Abdullah have said that they will not contest elections until statehood to Jammu and Kashmir is restored, Bukhari said: “It is their own choice… We are for the redressal of people’s difficulties. For that elections should be held and statehood be restored as promised by the Home Minister.”

He said the Apni Party will fight the elections in all the 90 constituencies and “our party will win with a majority”.