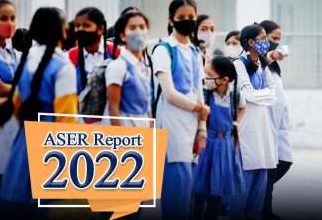 JAMMU : In what could be an encouraging trend, the hilly/far flung districts in the Union Territory (UT) of Jammu and Kashmir have fared much better than the plain districts in terms of enrollment of children aged between 6-14 years in the government schools.  This has been revealed in the 2022 edition of the Annual Status of Education Report (ASER) report prepared by the Pratham Education Foundation.

The latest report stated that across the country, the enrollment of students in government schools have increased significantly in the past few years. As many as 72.9 per cent of the surveyed students go to government schools. The report also highlights an increase in the number of private tuition takers.

Enrollment in government schools have increased significantly since 2018 – when a regular nationwide survey was done by the organisation last time – as per the report. In 2018, the number stood at 65.6 per cent. The period 2006 to 2014 saw a steady decrease in the proportion of children (aged 6 to 14) enrolled in government school.

ASER, is an annual, citizen-led household survey that aims to understand whether children in rural India are enrolled in school and whether they are learning. From 2005 to 2014, and then every alternate year till 2018, large-scale, nation-wide ASER surveys provided representative estimates of the enrolment status of children aged 3-16 and the basic reading and arithmetic levels of children aged 5-16 at the national, state and district level.