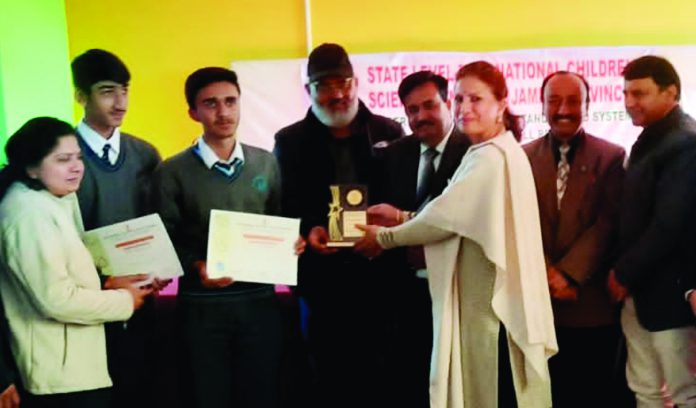 JAMMU :  The presentation of projects in the National Children’s Science Congress at JKUT Jammu Division Level con- cluded here today success- fully at Tiny Tots Hr. Sec.
School Sainik Colony Jammu. 48 projects prepared by children between the ages of 10 and 17 years of age from various schools of Jammu Division were presented and evaluated during the two days.
The programme was organized by Nation Council for Rural and Urban Development Society Jammu under the guidance of Zaffarullah Khan state Coordinator NCSC Jammu with the support of Directorate of School
Education Jammu. In his welcome address, Kuldeep Gupta State Academic Coordinator NCSC Jammu highlighted the structure of NCSC and gave a detailed report of NCSC Jammu as a whole.
While giving the details about the programme Dr.
Ashaq Hussain chairman organizing committee added that National Children Science Congress is a flag- ship program of NCSTC and department of Science and Technology (GOI).
The programme is aimed at creating scientific temper among students from the school level and any other children with scientific ideas. This science congress was organized in all Districts of Jammu Division with close support and coor-
dination of School Education Department and about 300 projects were pre- sented by Child scientists at the District Level.
Total 48 child scientists made presentations at the state level and 7 of them were selected for National Level Children of Science Congress to be held from January 27 to 31 at Ahmadabad Gujarat.
The valedictory session
of the event was presided over by Suraj Singh Rathore, Chief Education Officer Jammu, whereas Dr.
Vikram Handa Principal of the host school and Ashok Kumar Raina Dy. CEO Jammu graced the occasion as guest of the occasion.
In his valedictory address, Rathore urged all teachers to motivate stu- dents to take part in NCSC and other scientific activi-
ties and choose science as a carrier.
The seven projects which have been selected for the National Level Children Science Congress include from senior category.
Aarush Dev of GHSS Sunerbani, Anjrudh Sharma of Little Angels, HSS Kathua, Parth Magotra of Heritage School Jammu, Naman Jotshi of SOS Hermann Gmernier School Jammu and from junior category, Rujla Mahajan of Heritage School Yashasvi Koul of Army Public School Jammu and Vikrant Mehra of Learning Temples English medium Kathua were selected for Nationals to be held from 27 to 31 January 2023 at Science City Ahmadabad (Gujarat).